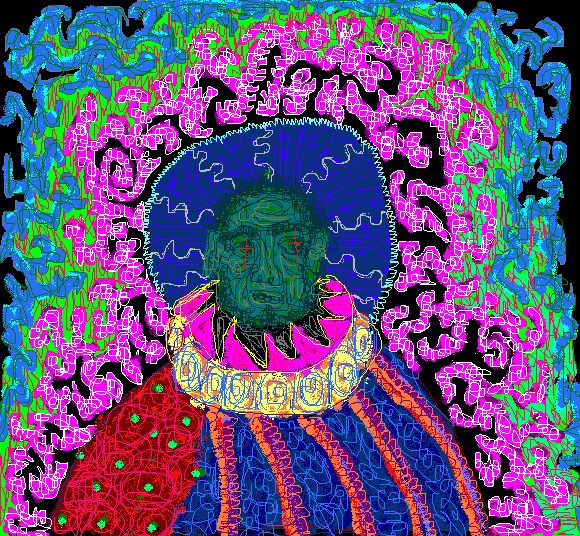 The new moon mocked us. It blocked out the stars at night, becoming a patch of horrible dreading black in the sky. Many people covered their windows, avoided mirrors afraid to glimpse the sky. Looking only down. I stared at it without blinking, afraid that if I were to look away it would somehow grow closer. The meaning of the word hopeless was now truly understood, we lived literally without hope at all. Lacking a future. It wasn’t quite giving up, there was simply no mending to be done. How does one “fix” the end of the world? The end of history? Everything stood still from that moment, and yet continued to turn. Schoolteachers gave lectures to empty ghostless classrooms. Playgrounds filled with overgrowth. A mother, my neighbor two doors down, who had just had her baby a few days before the event, began to breastfeed a cat. No one said a word. No consolation could possibly be given to, so we as good people kept our mouths shut. When new babies were born, they came out with no tears or breath. A mother would give her child one first kiss, and one last, and the babe would float into the beyond. Joining its brothers and sisters in the clouds with no semblance of God. Clinging numbness, heavy unrelenting static drowned our minds. I felt a cold rod of grief and lacking live inside me, sitting vertically from the bottom of my stomach to the top of my throat. I felt my own insides turn against me. Go sour and loathing with no hope to feed on.
I went to work every day. In the mornings I read the paper and had a cup of hot coffee. I watched the steam rise from the mug and catch the light. I slept eight hours a night. I rode my bike on the weekends. One Saturday night I went to the bar. I met a boy there, he smiled at me and we shared a drink. “What do you want to do?” He asked me.
“What can I?”
https://i.imgur.com/nEiH719.jpg

This is the first part of a dream I had last year written in the form of a short story. I've had two subsequent dreams of this story since then that I will share later. It has been impactful to me in that I think of it often, I remember every aspect of it from the smells to the emotions the version of me in the dream felt. I can connect the feeling of grasping horror followed by stifling apathy to my own experiences of mental health. The story is called: Piper

It was the last most beautiful December day in history. The final day man could look up into the unending blueness of the sky and feel intense peace and wonderment, knowing his ancestors had done so before him. Knowing they, too, had stood, feet planted into the ground, dangling from the edge of the earth over infinite space. The early fog had cleared, the morning light growing into a bright afternoon. It was astonishingly clear out. I could see past the mountains in the far west. I imagined, almost believed, that If the land were flatter and the city’s buildings shorter, I could glimpse the ocean.
It was strangely silent, in memory unnervingly so, but at the time it had felt calm. The quiet was for a lack of youth. There was an unknown plague holding the nervous system of every child on earth. Doctors were baffled. The phenomenon was the first disease to appear simultaneously and with strictly youth based affliction. They tentatively claimed that despite its unfamiliarity, it would not be of consequence, it was simply a bizarre result of the modern age. This of course was incorrect.
The reports had filled the newspapers that morning. Unforeseen symptoms popping up everywhere. Mothers claiming their children were catatonic, unresponsive. They would ignore or push away any stimuli. Sitting blank eyed and still faced, silent where they once had played and sang.
I do so miss silence. Just before evening, the dry winter air was suffocated with the shrieks and howls of the children. Chaos shredded humanity’s standing. Every child on earth began to dance, slithering and writhing to the music of screams. They ripped off their clothes, stripping to awful innocence. They threw their little bodies in front of trains. Leaping off of balconies and bridges. Mothers tried to hold them back in futile desperation. But there was no stopping it. They would bash their fragile heads until their skulls cracked and blood poured like wine from their eyes and mouths. They would hold their breath until their lips and fingertips turned purple and their eyes glassed over. The sickeningly soft thunk of their forms hitting pavement echoed everywhere. The remained on the earth for only a moment as if to kiss it, before floating with awkward grace into the sky. Millions of lost helium balloons. They flew until they reached a place suspended over the earth. Hanging slightly over the clouds. A perfectly unfortunate observable placement. There they linked arms, pressed their bodies together, almost becoming one. They became a small planet. They formed structures, flora and fauna from their bodies. Reanimated little ones, blank eyed and stinking, roamed the territory aimlessly.